Posted on May 2, 2020 by michaelpatrickwelch 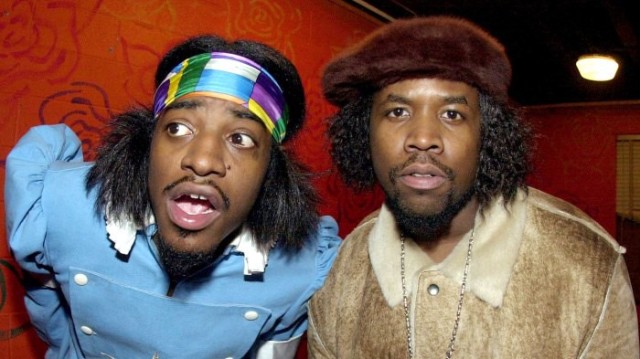 Andre 3000 was maybe the most interesting, brilliant artist I’ve ever interviewed — though it was not a good interview. Luckily, Prince ended up saving us.

Aquemini had just been released (featuring “Rosa Parks”) and OutKast was entering its mainstream phase. It may have been the duo’s first arena tour, and so I was granted 15 minutes on the phone with Three Stacks for an interview at the St. Petersburg Times.

A mere Editorial Assistant at the time — hired more to fetch faxes and mugshots than write stories — I loved rap music far more than any of the “real” reporters, and thus was handed some pretty incredible opportunities. For instance, because no one else wanted to cover arena rap shows, I enjoyed all-access press passes to both the Up In Smoke tour (Dr. Dre, Snoop, Eminem, Xzibit, Devin) and the Hard Knock Life tour, featuring Jay Z, DMX, Redman… I sat on a side-stage speaker next to Method Man while he rolled a blunt and we watched Jigga perform (more on that later when I get to the M section).

And somehow, no other reporters wanted to interview Andre 3000. So I got that gig. I was super excited. Until I got on the phone.

“Don’t mention Erykah Badu,” his PR agent or whoever it was warned me on the phone before putting me through to Andre. “If you mention her, he will hang up on you.” Their divorce hadn’t yet been made public. A traitor to my profession, I quickly crossed out my Erykah questions.

This set the interview’s tone. The agent also warned that I would be the fifth of eight interviews Andre would cram into that day. So of course, when I got him on the phone, he was in a bad mood, totally done talking. Then again, he has never seemed like the type who was dying to talk about himself — a fact that only becomes clearer as the years pass.

“All of the other rap on the radio right now is very different from what you all are doing. It’s almost like you’re smuggling a new kind of music onto ClearChannel rap radio,” I began, nervous as hell. “What do you think is different about OutKast’s music that is making so many people react?”

“People are just…feeling it, you know…” he replied. Nothing more. I was still very new to the art of interviewing people, and not yet equipped to break through such a brick wall.

I did not think to judge him though, and in fact felt bad that such a brilliant artist was being forced to do interviews when he was clearly suffering (I was not surprised when he later prematurely retired from music). Still, I definitely felt disappointed, as a fan who wanted to talk to the man about the intricate details of his art, about the drum machines and the different types of synths used on Aquemini, and about his working relationship with Organized Noize and Goodie M.O.B. (the first “famous” group I ever interviewed, just before Still Standing dropped).

He did tell me he’d played the bassline on the Goodie M.O.B. song, “Black Ice,” and that he wanted OutKast to become more of a live band, wherein he and Big Boi would both rap and play instruments, not unlike the Beastie Boys.

But overall, he spoke very little in those first 12 minutes. With about three minutes left, I asked him the final question I often posed to interview subjects: “How do you feel about Prince?” I used to ask everyone this question, from heavy metal god Dio, to comedian Bobcat Goldthwait. It always got the subject talking. Depending on how famous they were, they often had a really great Prince story.

Andre said he’d never met Prince, but the mere mention of the artist’s name began to break him free of his funk. I could hear his facial expression change as he told me, “I was in this record store in New York the other day man, and I bought this rare VHS tape of Prince live in concert, from like a long time ago! It’s just so beyond…” He went on and on about how amazing it was, the tape, for about ten more minutes. We discussed our mutual love of Prince until finally Andre’s agent cut in on our phonecall, and nudged him toward his next interview of the day.

So, while my interview was technically shit, I do believe I managed to cheer up one of America’s greatest living artists momentarily, on a particularly dark day in his life.

Michael Patrick Welch’s “132 Famous People I Have Met” series is FREE, but please consider donating to his VENMO (michael-welch-42), or to his PayPal (paypal.me/michaelpatrickwelch2), so he can feed his kids, pay his mortgage, etc.